Update 2020-01-01: Removed links to Google Play store since the app is no longer being developed or maintained. 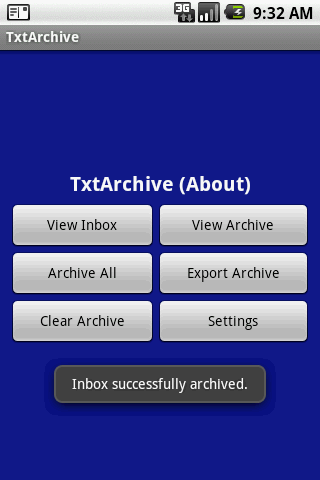 TxtArchive is an Android app I created in the Summer of 2009 for Zill Computer and Engineering, Inc. (ZillCE). It allows the user to archive and export the messages stored in their phone's SMS database, so that they can be safely removed from the device. It currently has 6700+ active users with an average rating of 4 1/2 stars on the Google Play store (as of 2012/11/15, its two year anniversary).

This was my first time developing a piece of software from its conception to its release. It was also my first experience with Android development.

In the summer of 2009, my friend Steve and I worked at Zill Computer and Engineering. Our primary job was to develop some C++ modules for a waste inventory system that ZillCE created and maintains for Dow Chemical. Fortunately, Steve and I finished this task sooner than expected, and needed to keep busy for the rest of the summer.

Since Android was just starting to take off, and Google was offering prizes to developers who submitted their applications to the Android Developer Challenge 2, our supervisor decided that we should get into Android development.

For the first few weeks, while Steve and I learned the basics of Java and the Android SDK, we also brainstormed ideas for the application. Eventually, we came up with the idea for TxtArchive, and began the design and coding process. After 2-3 weeks of development, our supervisors realized that we had a viable product on our hands, and decided to accelerate its release schedule.

TxtArchive was officially released onto the Android Market on November 15, 2009, and placed in the top 50% of applications submitted to Google's Android Developer Challenge 2.

In 2011, after forming Starbelly Software, I did some additional work on TxtArchive for ZillCE. There was a bug involving one of the most popular Android phones at the time–the Motorola Droid. User's messages were not showing up within TxtArchive, which was resulting in poor reviews on the Android app store, and in turn, poor sales. ZillCE hired me to track down the issue and implement a fix, which I was able to do by creating a separate Android utility application that we sent to some affected customers. When this application was run on customer's phones, it would (with the user's permission) email a diagnostic report to a ZillCE email account. With this diagnostic data, I was able to target and fix the bug, resulting in a four-fold sales increase.