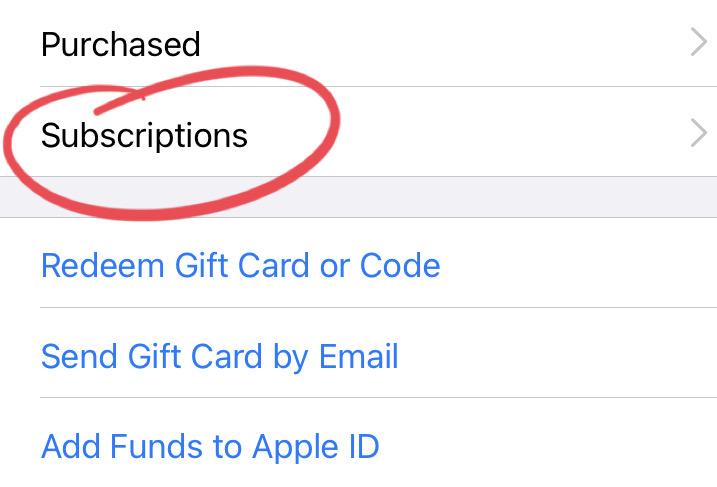 above: The cursed Subscriptions section in App Store settings.

Have y'all noticed the upward trend of subscription-based apps? They're EVERYWHERE. We have Apple to thank for that. While I think Apple does a lot of good, this is one place they have prioritized profits and have failed both developers and consumers alike in the process.

The US Government spent a day probing Apple and other tech companies about monopolistic practices a couple of weeks ago. I was disappointed to see the issue of subscription-based apps not get addressed. This is an area of the App Store where I genuinely feel Apple has misused its power. The government should put regulations in place to right this wrong. Get this–Apple loves subscriptions sooo much, they offer developers a 50% discount on the fee they take from subscriptions when compared to apps. Apple takes a 30% cut of App Sales, but only a 15% cut of subscription fees for year-long subscriptions. If making one model of app pricing financially superior to another isn't considered monopolistic and anti-competitive behavior, I don't know what is.

Before the App Store, the upgrade pricing model for software was straightforward. You'd buy an app for a set amount of money, and you knew you could use that app until it is no longer compatible with your operating system. Think of Microsoft Office back in the day: you could buy the disc and not have to buy another copy until you upgraded your computer or you needed a feature that was only available in a new version (lookin' at you, .docx files). This pricing model is great! As users, we get to decide if we want to continue using the old version of the app we already paid for, or if we want to pay to buy the new version of the app with the new features. Developers can invest time into creating a new version of their software knowing that they can sell that new version to users once they release it. Everybody wins.

No such thing exists on Apple's App Store, despite the fact that developers have been requesting, and finding clever ways of offering paid upgrades to their apps for YEARS. Savvy developers have found ways around this by creating new App Store listings for new versions of their apps, but that comes with drawbacks. Namely that they lose their app store rankings and reviews from old versions. Other developers have offered one time unlocks of available features, and lock down new features behind another one-time fee in the future. In my opinion, the Working Copy app for iOS has one of the most fair pricing models around. I commend the developer for not succumbing to Apple's subscription model.

For some apps like Netflix, or others with ongoing server costs, a subscription-based model makes a lot of sense. Its great that the option is available–I am not advocating for subscription-based-pricing to be removed. However, apps within Apple's ecosystem with no server backing and no ongoing costs have been moving to a subscription-based model. Apps that should theoretically work forever if the user never updated their software again are starting to get locked behind paid subscriptions. Mind Node (a favorite app of mine that I have been using for years) is the latest such app. Look at the backflips they have to do in that blog post to convince us that subscriptions are worthwhile. We all know they aren't ideal.

Subscriptions have other issues, none of which are consumer-friendly. Developers can sell their app based on promises of future features. Users might sign up for a subscription on good faith that developers will deliver the promised features. That day could never come. Worse: Apple's policies don't make it easy to get a refund for a subscription to an app that is updated to no longer function as promised. Users might pay for an app only to find that its next major release is something they want nothing to do with. Fantastical is one such app. They radically reinvented the app and its interface as part of their shift to subscription pricing... and it is not an improvement. Lots of people jumped ship from Fantastical as a result, myself included. Look at their recent App Store reviews. A PR nightmare.

Take the time to read the "Roadmap" blog post from one of my favorite task management apps, 2Do (I've been using 2Do since '09). This is a developer who feels it is unfair to charge a subscription for a simple to do list, but feels Apple has given him few alternatives if he wants to make a living off of his software. He rightly understands that users are less inclined to sign up for a subscription for a task manager than they are to shell out 4 or 5 dollars every few years for the latest and greatest version of that same app. Compounding the 2Do app's problems, iOS 13 abandoned the CalDav syncing API the app was relying on to integrate with the iOS Reminders. As a result, the application has been stuck in a limbo for a year as he assesses the best path forward. Apple shouldn't be allowed to play with people's livelihood in this way.