above: Note Taker shortcut in action

Update 2021-01-12: Updated shortcut link and post text to fix iOS 14 issue with hashtags. See my post about the bug for more info.

I created a shortcut that I wanna share with y'all. I think of new ideas at the most random times. An idea might be something I want to incorporate into an existing project, a new project, a topic I want to research, or anything in-between. Before this shortcut, I would file away new ideas by saying "hey Siri, note to self

The problem with this was that each new idea ended up in its own note. Then, at some point in the future, I have to comb through my notes and figure out what to do with each of them. This is an unnecessary step that builds up a backlog of ideas. It would be preferred if I took the time up-front to add the idea to its pertinent note. The problem: half the time, by the time I finish hunting down which note I want to put the idea into, I forgot the idea I wanted to capture. I've lost many good ideas because I forgot them before writing them down.

That mean I forgot better shit than you ever thought of

To help remedy this, I created a shortcut, Note Taker. When you run it, you will be prompted for text. After you enter the idea, it will let you pick from any note with a shortcuts-tag-thoughts tag and add the idea to the end of that note.

If this is your first shortcut, you might run into issues installing "Untrusted Shortcuts". I provide instructions for that here.

After you install it, you can run it from the Share Sheet or the Shortcuts app to take a new note. It will create a "My Thoughts" note for you on the first run, and you can add the shortcuts-tag-thoughts tag to any other notes into which you might want to file an idea. You can also select "Note Taker" from the share sheet to capture anything the phone lets you share into a note.

As explained above and by default, Note Taker searches for notes that contain the text shortcuts-tag-thoughts. But you might want to create a customized version that searches a different tag. I do exactly that for work so that I can capture notes for things I need to bring up in a 1:1 or upcoming meeting. Download my shortcuts-work-note version of this note here. Note: You will need to install the Note Taker shortcut for the customized shortcuts-work-note version to work.

For more documentation for this shortcut, check out the RoutineHub listing. 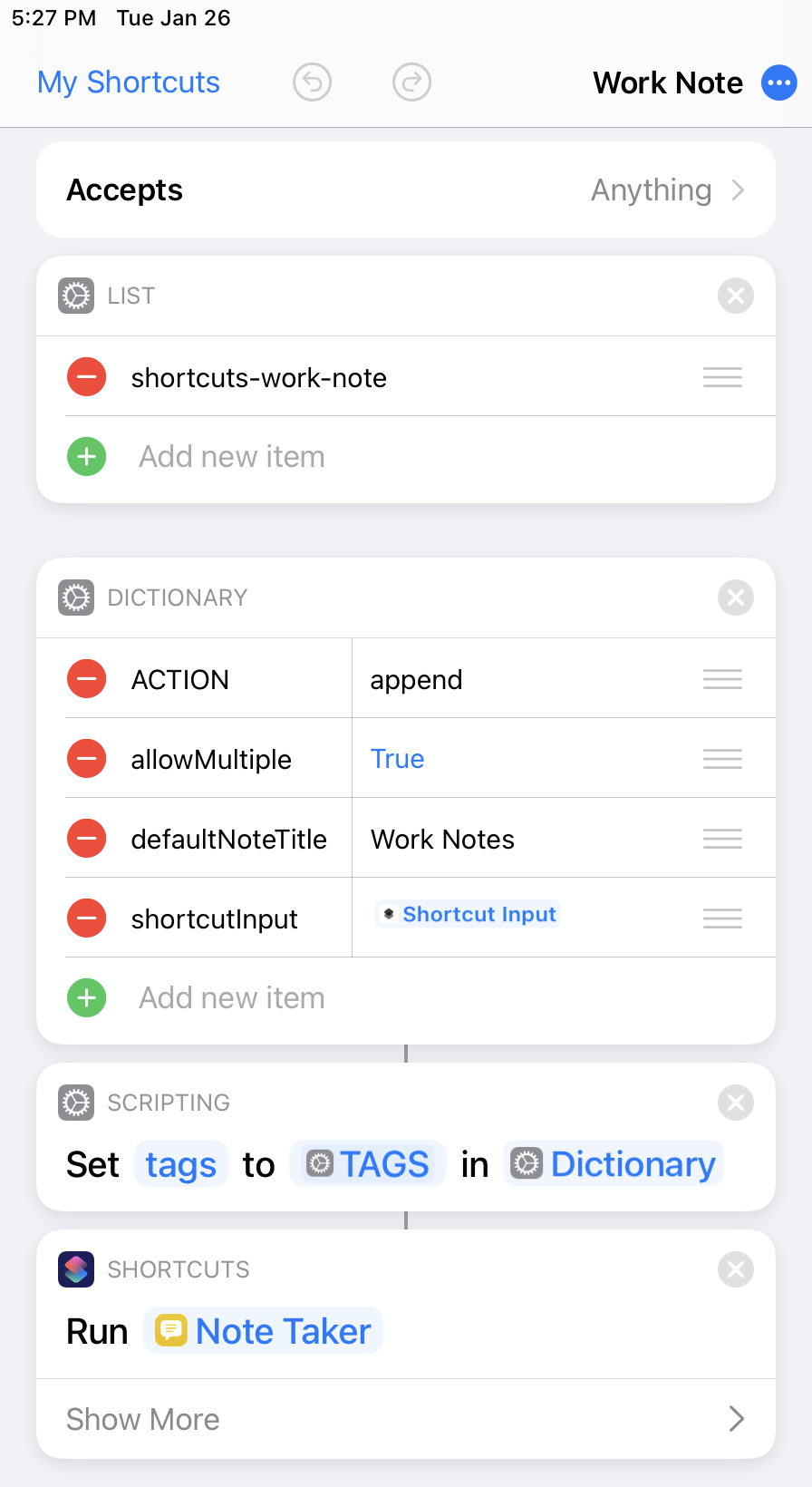