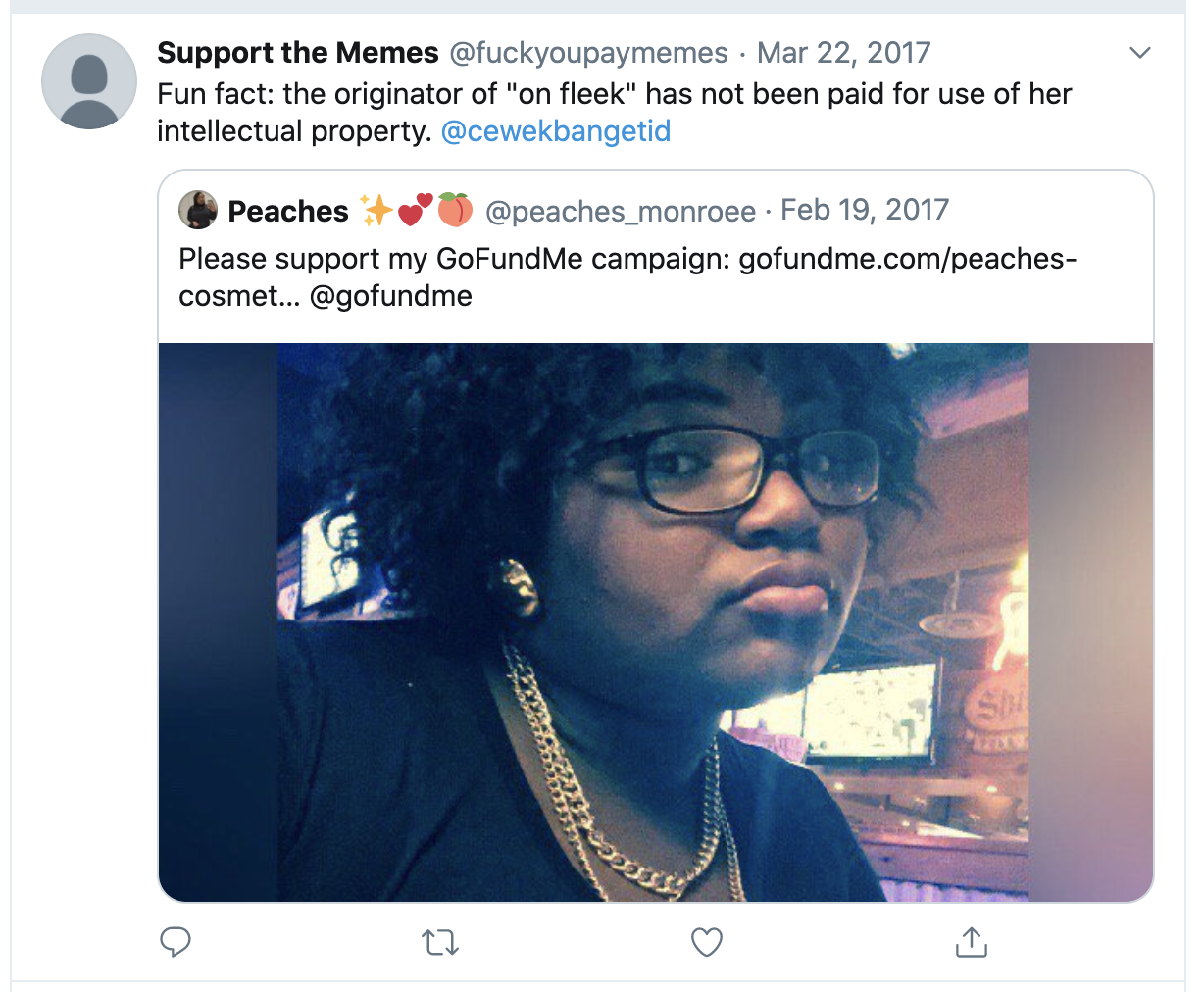 above: Fuck you, pay memes!

It does't sit well with me when I watch a term that Black people originated enter the collective consciousness and get used by your every day run-of-the-mill white person. The term "on fleek" is the latest example of this. Many others have covered this topic.

I wanted to find a way to apply my software skills to this problem. The popularization of "on fleek" is a great opportunity for this. Peaches, the term's originator, has an active GoFundMe campaign to raise money for having originated the term.

You might ask, "why does Peaches deserve money? Memes get created every day". I think anyone would agree with the sentiment that for any meme, the creator deserves credit and proper compensation when profits are involved. In the absence of universal justice for meme originators, you might ask what makes Peaches' case unique enough that I am blogging about it–America's ongoing crimes against Black people is your answer.

What some fail to recognize is that there are white-owned brands using the term "on fleek" in their advertising. Thanks to Peaches, these brands are able to gain access to a demographic that is otherwise inaccessible to them–there is value in that. White-owned brands should not be furthering their economic advantages over Peaches without elevating her along with them–to not do so is classical white people bullshit if you ask me.

There are people profiting off "on fleek" today who would look down on someone like Peaches if they encountered her in their everyday lives. THAT doesn't sit well with me. This is what people refer to when they speak of cultural appropriation–how many people throwing around "on fleek" knowing good and god damn well it's a term they would never embrace on their own, if the rest of the hive mind weren't too?

Enter @fuckyoupaymemes, a twitter bot I created that subscribes to all tweets across twitter, and when it finds one that contains the term "on fleek", it responds with one of a few random messages asking the user to contribute to Peaches' GoFundMe.

The code is sitting on my desktop, and I've got the bot running locally on my MacBook. I'll keep it up and running for the next few weeks while "on fleek" is dominating the hive mind. If it gets a massive response, I might spend time open sourcing the code and getting the bot hosted long term–no promises on that. The search term (in this case, "on fleek") and the canned responses are both configurable, meaning that this code could easily be adapted for the next meme.

Consider this my part in trying to get Peaches paid and raise awareness on the fact that even the seemingly innocuous spreading of memes can harm marginalized groups and further reinforce a wealth disparity in this country which white people reap by capitalizing on the labor (both physical and intellectual) of Black people without proper compensation.