above: Here's a UofM-produced video about my software engineering course, EECS 481, in which we made a video game designed to benefit those on the ASD spectrum

Winter semester of 2012, I took a software engineering course (EECS 481) as part of my major design experience.

Our assignment for the semester was to make a Microsoft Kinect game designed to be therapeutically beneficial to people with Autism Spectrum Disorder (ASD). Given that we were a class full of computer scientists, none of us knew anything about ASD; considering that we were making games designed to help people with ASD, we had to figure out what developmental deficiencies we could help improve through our medium of video games.

And theres also a USA today article about us here.

Because of the size of the class, we split into 9 or 10 teams of 3-5 people each. There were a total of five people on my team. We created a 70's themed dancing game by the name of Dancezilla. The game maps the player's movements to an in-game 3D character, so that anything the player does is mirrored on-screen. The object of the game is to dance while reaching for 3D spheres that are flying around you. When you successfully come into contact with one of the spheres, it explodes adding points to your funk-o-meter. Once the funk-o-meter is full, you have beaten the level.

Our goals in making this game were to aid in the development of the following skills:

In addition to the features of the game I described above, I implemented what we ended up calling "Caregiver Mode", a game mode in which a caregiver of the ASD patient can use an Xbox 360 controller to spawn balls on command, or spawn a special ball that they can then control with the joysticks. This enables caregivers to use Dancezilla in any way they see fit. For example, if their patient has particular difficulty doing reaching over their body, I.e. using their right hand to pick something up that is to their left, the caregiver can position the special ball on the side of the player, and instruct them to destroy it using the arm on the opposite side of their body. 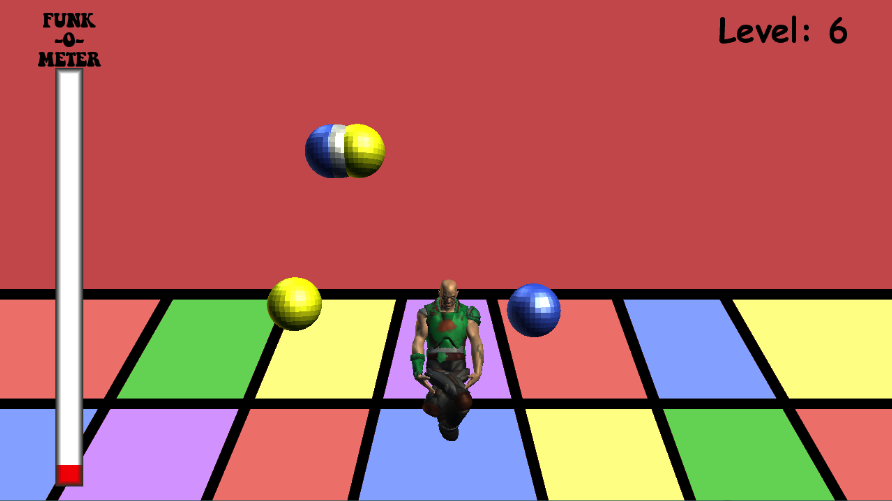 Pictured above: Screenshot of Dancezilla. I can't take a screenshot and play at the same time, so the 3D on-screen model is in his default position. Hopefully I can get a video uploaded at some point.